Gather round comrades, it is now time for a history lesson. I’ve now moved on from writing obscure interpretations of my favorite songs. This is now a trip down memory lane.

At this point, writing articles with the whole divisions of past, present and future has sort of become my signature, *clears throat* style. (I now possess the exaggerated swagger of a black teen). However, this time, in homage to multiple movie-makers I love, I’ll attempt a non-linear storytelling approach.

There’s more than enough boys in the world who refuse to shut up about football and whatnot, so my contribution to reducing that social menace is joining the club, but instead of churning out analyses, I’d like to take this opportunity to share perhaps the most beautiful moment in the history of the sport (in my opinion), a true display of sportsmanship.

It is the 17th of July, 1994. The stage is set at the Rose Bowl stadium in Pasadena, California.
A crowd of over 90,000 spectators have assembled to watch the FIFA World Cup Final between two absolutely stellar teams, Italy and Brazil- who were squaring off for the second time, previously being 1970.

The whistle is blown and the ball’s kicked off. After a rather unusual 90 minutes wound up, it was full-time.
Unusual because neither team had scored a goal, for the first time in a World Cup Final (a record that stands to this day).
A decisive penalty shootout followed, upon which the score was 3-2 in Brazil’s favor.

A million Italian hearts were shattered, a million more in Brazil screaming in exaltation.

Brazilian skipper Carlos “Dunga” Verri marched out onto the field, propping up a banner supported by his teammates.

20th April 1994, in a friendly exhibition match between Paris Saint-Germain and Brazil (a rare instance of country vs club), Brazilian Formula One racing driver and triple world champion Ayrton Senna is present.

Known for his cut-throat, pedal to the metal, and dauntless driving style, he is at the time the greatest of them all (of all-time, in my humble opinion).

He kicks off the ball, and post the friendly, proceeds to wish all the players of the Brazilian team good luck for the upcoming tournament, and hoped that both entities would be successful in their pursuit for the Gold. 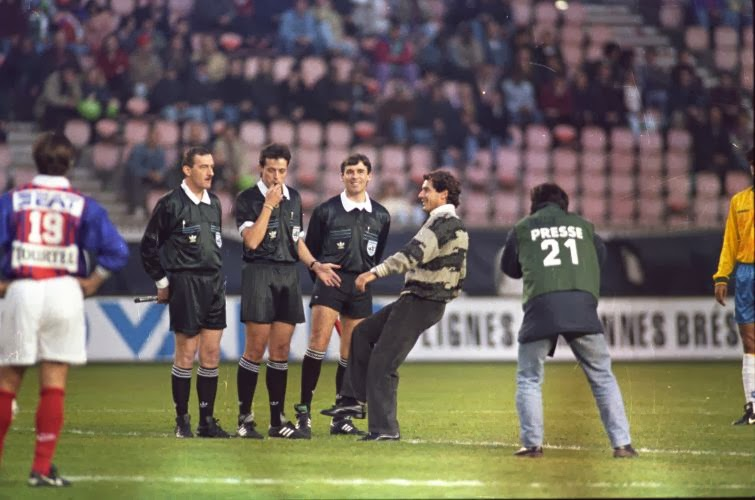 Ten days later, on the 1st of May 1994, Ayrton Senna crashes hard into the concrete barriers at 290km/h on lap 7 of the Imola Grand Prix in Italy, due to a mechanical failure of the steering column.
He is pronounced dead on the scene.

The nation had just lost its greatest hero, and the world- their favorite racing driver.

The government declared 3 days of nationwide mourning and millions piled onto the street to watch his funeral and bid him a final goodbye.

It would seem like the only thing that can pacify the gaping void left in the hearts of the Brazilian man would be the world cup trophy to return home.

Cut back (or is it forward?) to the afternoon of July 17th.

Dunga proclaims out loud for the world to hear, that the Brazilian team is dedicating this victory to Senna.

The banner reads “Senna… We’ve sped up together. The fourth title is ours”.

Such a befitting end to a travesty of a year, it’s more than just beautiful, it is poetic.

Senna represented Brazil and put it on the world map, being a Formula 1 ace. Both he and the Brazilian team were in pursuit of their 4th World Championship. Only one succeeded.

I think of moments like these, and realize the all-transcending nature of sports.
The greatest displays of humanity are often seen on the playing field.
Now before I get all teary-eyed and mess up this narration by getting preachy, I’ll take your leave.

Until the next time, tchau tchau.

One thought on “Campeon Del Mundo”