The title is a half-hearted attempt at humor. In my defense, I was very sleepy.

Christmas is usually weird for my household. While I do not (and can not) speak for all the Christian households in our country, my house has never played host to the whole hiding a present in socks shebang. Socks have a short service period which starts in the cupboard, goes through on our feet, and ends in the washing machine. Retired socks end up as cleaning rags at the most random places in the house, and we just relive and enjoy those memories whenever we see one of our shoe-buddies around. We have never come around to calling chips as “crisps”, biscuits as “cookies”, or “Ma, close the door on your way out, for God’s sake!” as “privacy” but then we aren’t really that modern, anyway.

I am stuck at home with good reason (couldn’t have done this without you, China), till I go to university later next year and all I’ve heard is how this year was a blessing in disguise. Personally, my mind believes in the glass-half-empty school of thought, and I really don’t think things could be worse than they are. Things would actually be better if people stopped talking about how the lockdown was a learning experience, and how they can do the dab now that they’ve taken online classes for the same.

It wouldn’t be justified to shame all the internet, even a place as scary as it has some nooks and crannies that aren’t life-draining and Dementor-ish. Sitting at home with way too many people indoors isn’t always easy for us introverts, and the internet is a good way to escape that thought for a while. It’s true that I made Dalgona coffee like everyone else, baked banana bread for no reason, and tried an ungodly number of fitness regimes on YouTube as if my abs were just waiting for this fickle sense of accomplishment to come up. Being at home used to be so easy when all extroverts used to be outside, leaving us introverts alone to self-deprecate in peace. I loved re-running five-year-old arguments in my head in order to fill the void that’s my brain, but then now I just have new ones with my mother about how we should cut breakfast sandwiches (what are you psychopaths doing if you’re not cutting them diagonally?).

Meals are probably the most mundane things now that eating out (or food delivery) is at an all-time low. Earlier, my parents and I used to have a fairly lengthy discussion about what we’d eat for the next meal, and now we’ve all relegated ourselves to eating anything between last night’s leftovers to last night’s leftovers over bread. I cannot count the number of times I have eaten food while watching random stuff on Netflix, without realizing what I’ve been putting in my mouth all along (Netflix and chill, please get the joke). As of 2020, the average user spent over three hours on the service daily and yet, being the typical overachieving Asian kid as I am, I’ve done much more than the average person.

All I wish to do now is to end this passage that started with Christmas with some wacky statistics because sticking to the word limit is a good habit for any tired writer, and also because good figures are always attractive.

All of us had comprehensive plans for the year that were terribly foiled, but such is the magnanimity of the human spirit that we got through nonetheless, albeit with dangerously excessive screen-times that our digital wellbeing will hate us for. Learning new things, experiencing new feelings, and trying new hobbies make us all unique, and that’s important.

After all, even if you’re one in a million, there are 1350 of you in this country.

It was the beginning of December, and they hadn’t seen each other in person for more than nine months now. They missed each other’s touch that used to heal their pains and all the miseries. They craved to feel each other’s breath while his nose brushed past her cheeks. She yearned to gauge the depth of his eyes while he just wanted to caress her hair. Both of them longed for not more than a hug that would bring back all the memories of the beautiful past and wipe out the dull present. The past nine months had seen it all. The journey had the fair shares of her absence in his joys and his presence in all her cries. It was getting more challenging for them to wait more, each passing day, with guilt, regrets, resentments and disagreements, but they didn’t want it to end. He was ignorant and selfish, and she was sensitive and over-possessive, yet, they both knew that they wanted to be together. Every fight made them weaker but the anticipation to finally meet, and execute all the plans of how they would hug, kiss, smile- made them stronger. Every time they felt like giving up on the bond, those calls that though were never enough- made them stay and work harder. The distance of 500 miles tested every bit of their patience.

But this time, it was very different. There was a kind of numbness in the emotions. She became used to his uncaring attitude and paid no heed to him whatsoever. The weeks of not talking to each other did not bug her anymore. She was not angry or upset, just uninterested, and in no way she let him interject her space. For him, everything was falling apart, and all the dreams were getting shattered, for she was his first love. For her, everything came to an end, for he was her last. He called her every day, and she remained quiet. She listened to him, which he never did. He spoke everything, which she never did. She wanted to feel special and be heard as his mom did. She wanted him to drive her home and feature on his social media as his friends did. She thought he would fly to her place and surprise her. Maybe he could desperately text her in the middle of his day or go to the gym to get fitter or send her pictures randomly. He just wanted her to understand. The way they loved and showed love was different, and no one could understand the other. After his numerous failed attempts and the infinite chances she gave, he couldn’t put up with the stress anymore. But, in front of the struggle in the past nine months, everything seemed insufficient to her. They could neither reach any middle grounds nor heal their wounds. In the process, they also lost their friendship as they lost their grip on each other. And they finally put a full stop to the LDR of more than nine months and chose to break up.

It wasn’t long that the Christmas eve came, and with their shared playlist in the background, she scrolled through their old chats. A tear dropped down her eye as she glared at his profile picture with his new haircut. With her shaky hands, she opened the hidden folder of their happy photos together. A flashback of all of their memories and moments ran through her mind. The tears knew no bounds as they reminisced the past. Short of breath, she reluctantly opened his chat again and started typing. With sentences that didn’t make sense and numerous typos, reiterating the same memories, she poured her heart out. She was needy and had no courage to face this harsh reality. She couldn’t bear the pangs of their separation and had lost all her hopes. But the way it ended, it held her back. She deleted the whole long paragraph and restricted herself to just typing a single line. The clock ticked 12 and the ticks turned blue the moment she sent the message saying “All I want for Christmas…is you”.

It was the December of 1914, a few months into the First World War (or the Great War as it was called then).
Mobilized troops already had had enough of the trench warfare and were looking forward to getting home for Christmas, to spend time with their family.

Orders from the brass up above made sure that none left their posts from the war-front.

So, it was settled then. They’d not leave ground zero. At least not while still breathing.

The following story is narrated from the fictional perspective of a very-real, young, Private (later author) from the British Infantry, rifleman Henry Williamson.

“Gentlemen, today we fight no more. Lay your rifles to rest.”
The sun was nearly out, and everywhere I lay my eyes on I saw people sloppily walking back to their trenches.
I felt a sharp nudge on my back as my friend and fellow rifleman Wilkins “Willy” prodded me with the butt of his gun.

“Make it quick” he began. “The cake’s almost over!”.
I tightened the grip on my rifle and slowly ran to the ration hoard.
The night was getting darker and darker, we could see nothing for a while until the pale moonlight sifted through the clouds.
It was almost midnight, just when I had started to fall asleep that I felt a second nudge.

There it was, on the No Man’s Land, lining the German trenches, candles. Well-lit candles.

And we could hear faintly, a gradually approaching noise of Christmas carols.
“This could be a trap. Stay advised” cautioned a neighboring Lieutenant.
But we could already see our barracks moving towards them, now singing carols of their own.

I found myself following them, like a moth drawn to a flame.

And at the border, I heard “Frohe Festtage!”. Seasons greetings.

At the stroke of midnight, we sang “Silent Night” together.

The next morning, we had long crossed the trenches into opposing enemy territories.
A young German officer I’d met earlier had given me some of his tobacco for me to smoke my pipe.

I couldn’t believe what my eyes were feasting upon.

German and British soldiers, riflemen, medics, and anybody else that was here, laughing and exchanging whatever they could get their hands on. Tobacco, alcohol, rationed meats, and even HATS!
What a wonderful sight.
It was around noon when someone had the bright idea of kicking a tin of bully-beef as a football.
The “football” was passed back, and so it began.

For a few good hours, we did nothing but play football.
”Would be nice if we settled the war this way eh?”

It was around evening later when the German soldiers slowly started retreating to their side.
Word around was that the German High Command wasn’t too pleased to hear about this friendly exchange.

We weren’t better off either, a lot of our senior ranking officers expressed their clear displeasure on the same.

The only disappointment in the faces of us Privates was on having to return to the trenches, knowing we’ll have to open fire on them a few days from now. The futility of war versus the spirit of brotherhood. Some of us had even made friends with them.

Like me, with the young man who had given up his tobacco for the month.
He bid goodbye to me and walked away, after making a quick comment in a thick German accent.
“We’re not so different, you and I.” 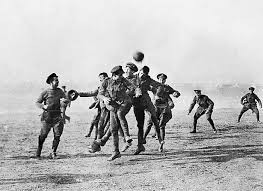 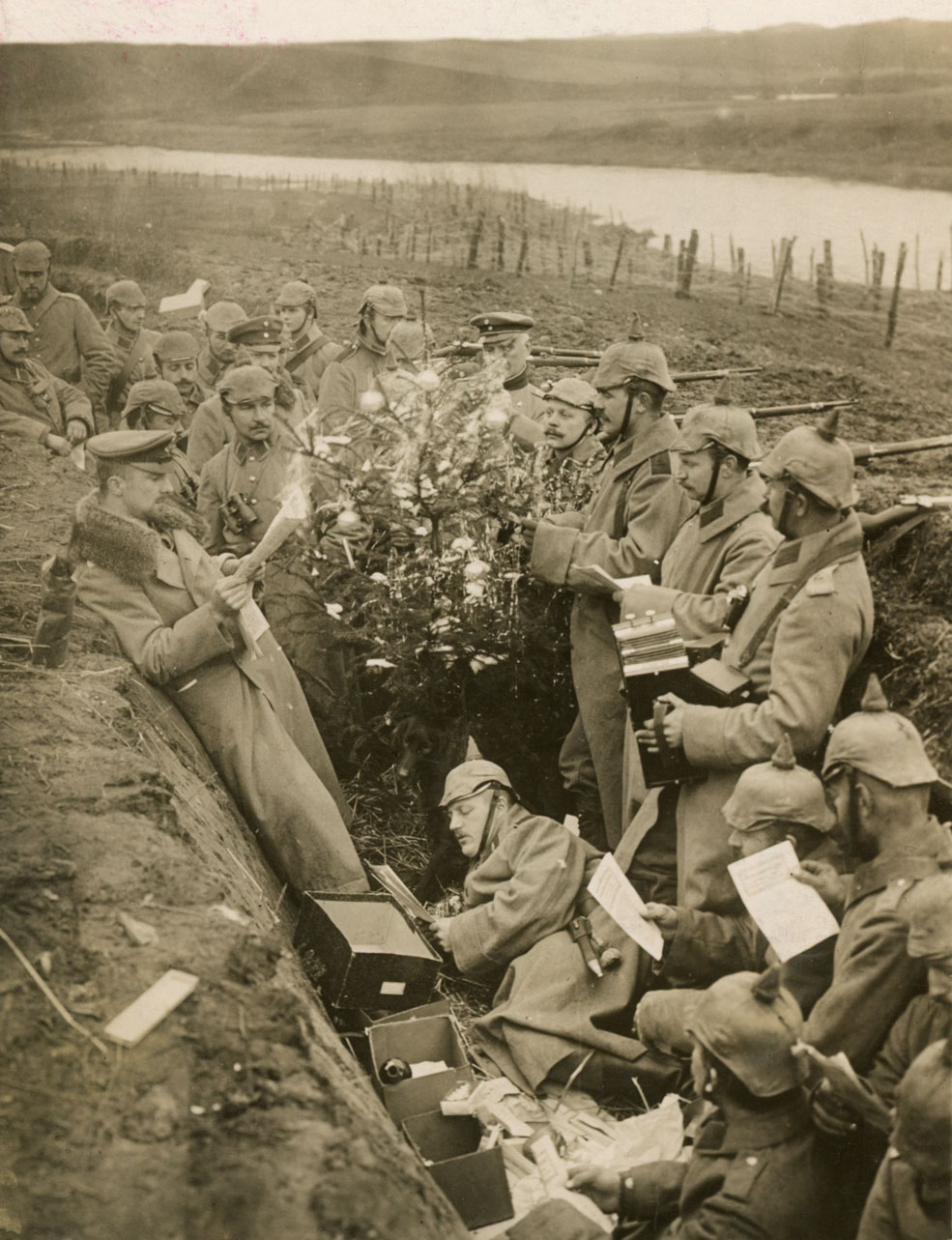 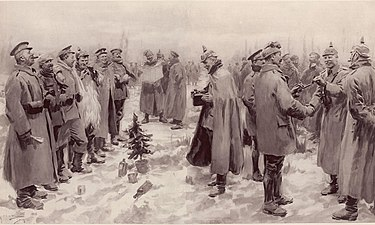 This may be a good place to introduce yourself and your site or include some credits.

We are currently moving from our old website to this one. Please excuse us for any bugs you may face.